This little boy is very sick. With what? No one knows. But this much is clear: Against all odds, he’s getting healthier every day. 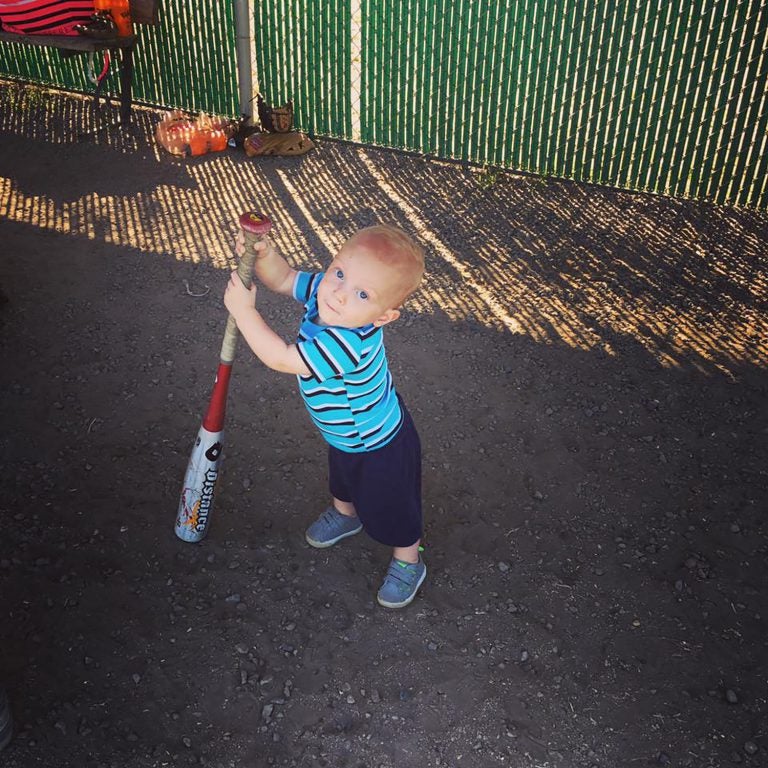 Gideon Hobbs rumbles through the hallways of his family’s crowded house, speeding past his three siblings en route to his mom, Heather. As it happens, Heather is on the phone talking about young Gideon, but he has no time for pleasantries. He’s jonesing for a snack, and like most rambunctious two-year-olds, he’s being loud to get his message across. Heather pauses her conversation to tend to the clatter—her other kids are adding to the chorus, too—and happily obliges her son’s demand. All in a minute’s work of raising a rowdy toddler.

Most parents will agree these kinds of moments are perfectly ordinary, but to Heather, even the simplest, most mundane interactions with Gideon are extraordinarily perfect. That’s because Gideon wasn’t supposed to make it to two years old—in fact, he wasn’t supposed to live at all. But somehow, he’s managed to overcome the mysterious medical condition that experts considered a death sentence. Heather can’t explain it, and neither can some of the best doctors in the world. Instead, she simply says, "He’s a miracle." 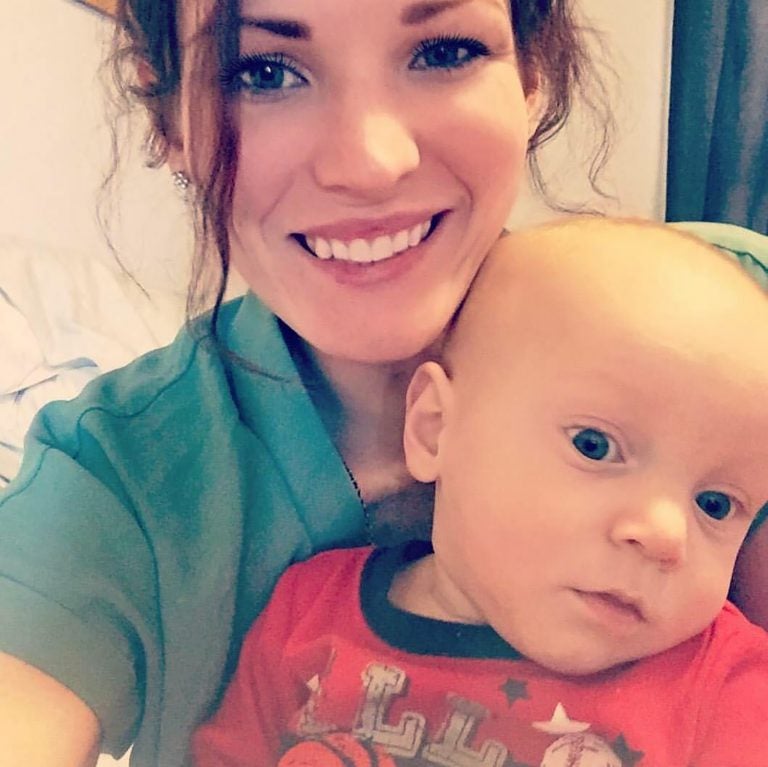 How to overcome the odds

How Gideon Hobbs went from lost cause to medical marvel may defy explanation, but his mother’s knowledge, intuition, and willpower certainly played a huge role. Here are four things she learned about knocking down obstacles on the path to better health.

Lesson #1: Always listen to your body

Heather had already given birth to two kids, Alexa (now 9) and Tristan (now 4), so by the time she got pregnant with Gideon in 2015, she knew what to expect when you’re expecting. Her third pregnancy was a breeze—until it wasn’t. Twenty-four weeks in, she started to sense that something was off. "I’m trained as a paramedic, so I’m not naïve to the medical world," says Heather, 29. "All of a sudden I kept feeling dizziness, lightheadedness, that sort of thing. But when I told my doctor, she didn’t think it was abnormal."

The doc chalked the symptoms up to stress, but Heather knew her body better than that. "I’ve learned to trust my intuition," she says. "If you feel like something is wrong, it probably is. I just didn’t know the severity at the time."

Undeterred by her doctor, Heather forced another ultrasound. Sure enough, the result was strange: a large circle in Gideon’s abdomen. It took a full five days for doctors to actually diagnose the imaging. The team at the local hospital in Medford, Oregon—1.5 hours away from Heather and husband Jeremy’s home in Klamath Falls—shipped it off to Oregon Health & Sciences Hospital, the biggest in the state, who then forwarded it to Mayo Clinic in Rochester, Minnesota. Finally, Heather was given an answer.

The circle signaled something called a meconium pseudocyst, a rare condition "where the intestine bursts for an unknown reason and the body builds a calcified shell around it," says Heather. When Mayo Clinic doctors delivered the diagnosis, they said there wasn’t a surviving patient on record.

Lesson #2: You’re stronger than you realize

What goes through your mind when you’re told your unborn child may not survive? "To be honest, I thought I would be more scared and stressed," Heather says. "In fact, I’d often ask myself why I wasn’t freaking out."

Heather says she has unshakeable faith, for starters. But her medical background helped her stay calm and centered, too. "I basically said, 'If he dies, he dies. And if he lives, he’ll be a miracle, and he’ll be studied, and they can save more babies like him.'" Spoiler: She was right. If that perspective is impressive, try being told you may die if you don’t terminate your pregnancy. "They said since the baby was infected already, he’d make my body go septic," says Heather. "There was a strong chance I might die."

Once again, Heather didn’t back down. "They said, 'You could just make another one.' And I responded, 'That’s not how this works, dude.'" She signed waivers releasing her doctors from liability and pressed on with her pregnancy, making twice-weekly trips to Medford—three hours each way, due to nasty January blizzards.

During one appointment at 27 weeks, Heather told her doctors she thought she was entering labor. They guaranteed her she wasn’t. But after driving back home to Klamath Falls through a vicious snowstorm, she felt a tingling in her hips. Later that night, she checked into her local hospital and found out that she was indeed 5 centimeters dilated. The doctors ordered an emergency air ambulance to Portland but had to wait to fly five hours because of the weather. The next morning, February 3, 2016, Gideon finally arrived. "He was purple and black and wasn’t breathing," Heather says. "He looked dead already."

Doctors immediately stabilized, intubated, and prepped Gideon for his first big surgery, to remove the pseudocyst (it weighed 1 pound 10 ounces). While Heather and Jeremy waited through the operation, the hospital repeatedly sent grief counselors to their room. "They kept saying, 'He’s not going to live, he’s not going to live.' And I kept saying, 'Okay, if he doesn’t, we’ll deal with it then. Stop sending these people to me!' I’m very stubborn."

Gideon survived the surgery but remained in the hospital for 4.5 months, where he battled everything from MRSA to pneumonia. During the first year of his life, he was hospitalized for 10 months. The lengthy stays took a toll on Heather and her family. "It was really, really hard, especially for my other son," she says. "He was constantly wondering where his mom was."

Luckily, Jeremy and the extended Hobbs clan pitched in. "My husband took care of the cooking, and his mom’s whole family is out here [in Oregon]," says Heather. "So all of his aunts and uncles and their kids have helped. They’ve been great. Gideon’s struggles have brought our entire family closer together."

Gideon made it to his first birthday, but he was hardly healthy. Most of his illnesses, it seemed, stemmed from a misdiagnosis of cystic fibrosis (CF). "He couldn’t gain any weight, he didn’t have any hair, and for nine months, he couldn’t kick pneumonia, which spread up to his face and caused him to leak all this nasty stuff from his nose and ears," says Heather. "I told his doctors that I didn’t think he had CF, and that the pancreatic enzymes they were giving him to treat it were causing him to be so deathly ill."

Doctors placed him on a gastrostomy tube (G-tube) at six months to kickstart weight gain, but he still fell below the fifth percentile, registering as "failure to thrive." When a local Klamath Falls doctor suggested visiting Mayo Clinic to see GI specialists, Heather took the kids and the family dog in her camper to make the five-day trek to Minnesota.

The trip provided some clarity. The Mayo Clinic doctors ruled out CF right away—there’s mom’s intuition again—and removed extreme amounts of scar tissue from Gideon’s lungs that remained from pneumonia. They also put in ear tubes to help the infections drain from his face. Still, they were stumped as to why he couldn’t keep any food down. "He threw up every kind of shake you could imagine," says Heather.

That’s when the Mayo doctors recommended Kate Farms. "They suspected that Gideon wouldn’t have any issues with these shakes since they’re plant-based and soy- and dairy-free," Heather says. They were right. "The first thing we noticed was he didn’t get violently ill, which usually happened 30 minutes after he ate anything. Then within a few days, he seemed a little peppier after the shakes. Before long, he started gaining weight and sprouting little fuzzy hair. In just three months, he looked like a totally healthy boy."

Nowhere to go but up

Gideon has had two Kate Farms shakes a day ever since the Mayo Clinic, and he hasn’t fallen ill with pneumonia or required a major hospitalization during that time. "Mayo Clinic wants to see him twice a year to follow his progress," says Heather, who recently gave birth to another daughter, Elly. "Gideon is a case study now, and Kate Farms is heavily documented in his case as one of the major reasons for his turnaround."

The fact remains that Gideon’s diagnosis is still a mystery. "They don’t know if he has some new genetic disease, or if he just doesn’t fit the classic description for another one," Heather says. "But unless they suddenly figure out that it’s something scary, they expect him to keep on growing and to be happy."

That’s all Heather ever wanted—a perfect ending to an extraordinary story. 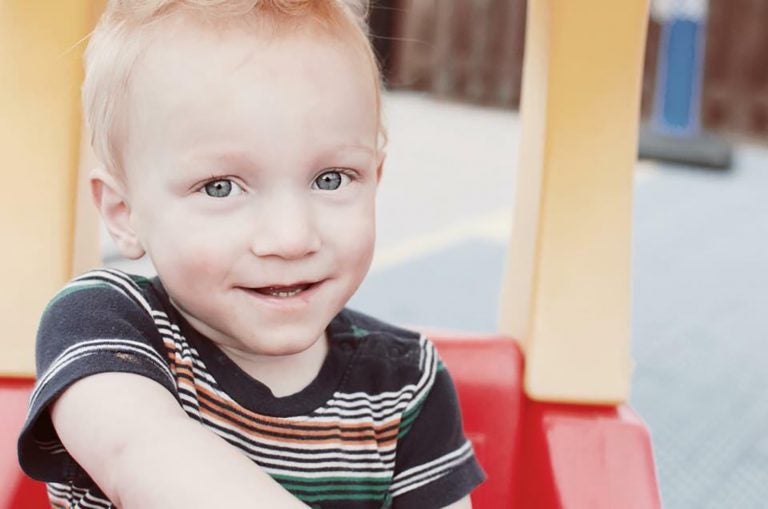