Life dealt this 13-year-old a rough hand, one that includes autism and cancer. So naturally, he sings and dances every day. 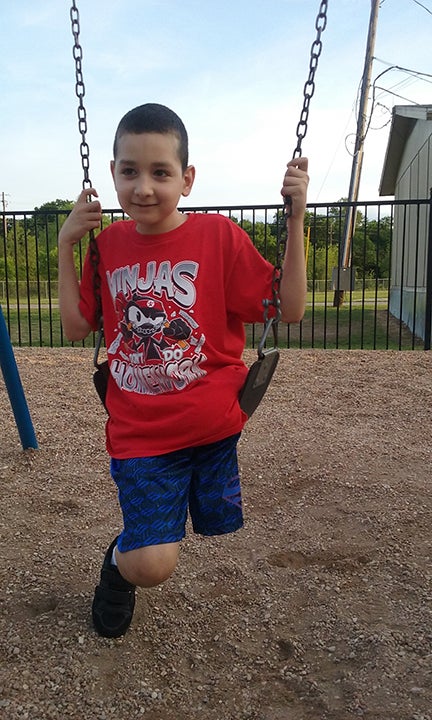 Tejas Briseno is used to navigating the world on one leg—he’s been doing it for almost two years. He briefly tried a prosthetic but hated it. He’ll sometimes use a wheelchair when he’s tired, but that’s not how he prefers to roll. For the most part, he sticks to his trusty walker, bulldozing through the hallways of his house and past his fellow students at Pearson Ranch Middle School in Austin, Texas. But Tejas throws his walker to the side regularly when he wants to climb the walls at his favorite playspace or skip onto the school bus instead of using the handicap ramp.

The metaphor is not lost on his mother, Rebecca Clinton. "He just doesn’t let anything get to him," she says. "After all of these things that have happened to him, he’s still happy, and he does every single thing that any other child can do. The only difference is he hops a little bit."

Make no mistake: Tejas is no ordinary child. For starters, most kids his age haven’t fought extraordinarily against a devastating disease, all while keeping a smile on their face. Rebecca isn’t sure how her son has managed to summon so much strength, courage, and positivity in the face of osteosarcoma, because she can’t exactly ask him. Tejas has nonverbal autism and only speaks a handful of words. But she’s thankful that she can look to him as a source of comfort.

Unlocking this kind of perspective didn’t always come easy. For a while, Rebecca and her husband, Vince, couldn’t help but feel sad for Tejas—about the crushing cards he’d been dealt and their little boy’s uncertain future. To understand how Rebecca learned to deal with life’s ups and downs by following her son’s lead, you have to flashback to a night in December 2015, when everything changed in an instant. 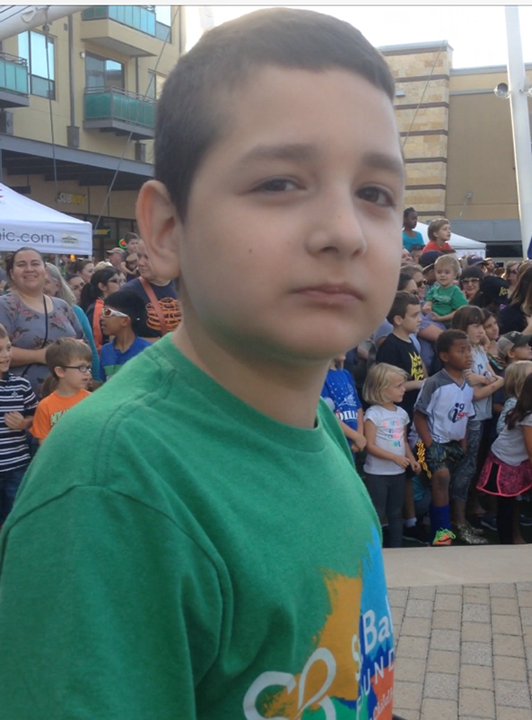 The knee sprain that wasn’t

Rebecca and Vince run a tight ship. Most nights are lights-out by 7:30 p.m. One night it was business as usual, until Vince changed Tejas’ pants and noticed one of his knees was about twice the size it should have been. Tejas yelled, "Ow, ow, ow!" and started to laugh—his usual sign for when he’s really hurting, Rebecca says. A noticeable limp added to her concern, but a call to the family pediatrician yielded an Advil recommendation and the assurance that kids frequently sprain their knees doing all kinds of things.

"When you have two autistic children"—Tejas’ 14-year-old sister, Sasha, also has autism—"you just assume that there are going to be injuries," Rebecca says. "So we didn’t think much of it."

A few days later, Tejas took a class trip to a bouncy house, spending several hours climbing, jumping, and putting his knees to the test. The swelling remained. "I just felt like if it was an injury, his knee should have been way worse after all that exercise," she says. "That’s when instinct told me something was really wrong."

Rebecca remembers the doctor’s demeanor the next morning as she examined Tejas’ knee. "Her face seemed very worried," she says. "She was very quiet, and she was feeling the swollen part on his knee with her eyes closed. She was concentrating harder than I’ve ever seen her." A couple hours passed as they waited for X-ray results. When 4:00 p.m. hit, the doctor’s shaky voice over the phone revealed all, "I have shown his X-ray to every single person that I know, and every single person has the same answer: There is a solid mass inside your child’s bone."

The doctor’s directions were clear and urgent: Rebecca and Tejas needed to be admitted to Dell Children’s Hospital immediately, where a team was waiting for their arrival. They were one the fourth floor, Pediatric Oncology and Hematology wing. "I knew they were going to want me to cut my son’s leg off,” Rebecca says. “All I kept thinking about was that leg."

Traffic to the hospital was especially bad that day, and the hour-and-a-half trip didn’t ease Rebecca’s nerves. But she couldn’t lose her cool—not in front of Tejas. "My kids are so sensitive to my disposition and how I’m acting that they’ll get upset if they see mom lose it," she says.

Upon arriving at Dell, Rebecca met a pediatric oncologist and an orthopedic sarcoma surgeon from Texas Oncology, who confirmed her fears: Tejas had high-grade osteosarcoma, a cancerous tumor that develops in bones. In his case, the tumor took up more than half of his femur. "It was so surreal," Rebecca says. "You just kind of go blank in that moment. They tell you all the things you’re going to have to do, and you don’t remember a single word."

Rebecca didn’t know the disease would come to consume the next two years of her son’s life, but the ignorance was a blessing in disguise. The oncologist told her and Vince not to consult Dr. Google. "If you look up osteosarcoma, it’s not going to be good. Don’t do that to yourself. You just have to listen to me and trust that I’m going to do all I can to get rid of this thing forever."

That was the first piece of advice. The second? "It’s just a stupid leg. I would remove it and not even look back. Please choose amputation, because it’s the best, safest option for your child. If this were my child, I’d cut the stupid thing off. He’ll be okay."

For Tejas, amputation wasn’t just the best option, it was the only one. While most patients want to save the leg with a surgery called a limb salvage, Tejas’ nonverbal autism made the procedure practically impossible, since the resulting physical therapy would require him to repeatedly follow directions. The risk was too great. "We chose amputation without even a thought," says Rebecca. "It was simple: We didn’t want him to die." 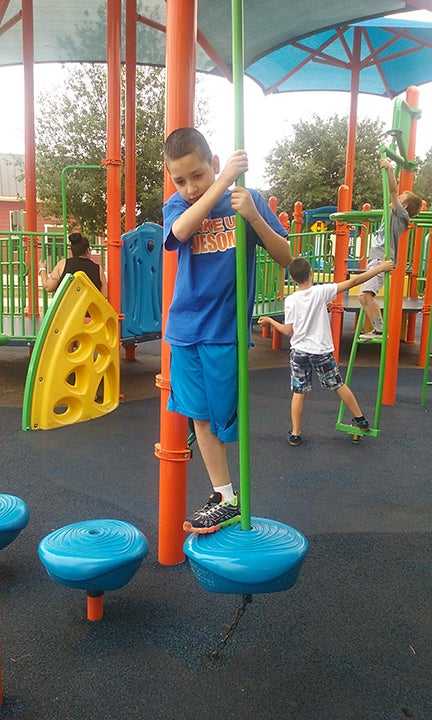 You never get used to poisoning your child

Tejas had to wait three months before surgeons could remove his leg. First, he had to face chemotherapy, and not just any regimen, but a particularly aggressive set of drugs that came with a slew of side effects. They sounded like menacing gibberish to Rebecca: Cisplatin, Doxorubicin, Methotrexate.

Together, all three would be delivered in high dosages, ensuring plenty of nausea and vomiting. Each would have to be administered in the hospital and paired with rescue medication before and after every treatment to protect against organ damage.

The first round of chemo was a nightmare, Rebecca says. "You never get used to putting poison into your child. You just don’t." Early into his treatment, Tejas was in desperate need of a way to receive and maintain nutrition. He was rapidly losing weight, "and you can’t fight cancer being malnourished," says Rebecca.

Before the chemo, Tejas, like many autistic children, was an incredibly picky eater. His diet consisted of fish sticks, pizza rolls, chicken nuggets, and the occasional piece of fruit. Tejas was finally able to put on a little bit of weight after doctors inserted a gastronomy tube (G-tube) into his abdomen and fed him a generic peptide formula. However, Rebecca became concerned when she closely inspected his food and noticed that there wasn’t any, well, food in it.

"It was all chemicals and sugar," she says. "Basically, stuff that can fuel inflammation, and as a result, cancer. While the formula was keeping him alive, we also knew that he couldn’t fight cancer with that kind of nutrition. So we said as soon as he’s off chemo, we’re getting this stuff out of his system."

As the chemo carried on through the spring, Rebecca’s boy began looking like a complete stranger to her: no hair, no eyelashes, no eyebrows. "When I look at pictures of him during that time, I’m still shocked," she says. "My brain has blocked it." She remembers taking Tejas to Walmart when his counts were high enough to leave the house and noticing two elderly greeters burst into tears after seeing him. "You never get used to the way people look at your baby."

Strangely, Rebecca felt bad for them. "I felt like I needed to console them and tell him, 'He’s okay! He’s smiling!'" And he was: Tejas had proven to be a trooper during every cancer clinic visit and surgery, and especially after his amputation in March 2016. "When he woke up, he looked at his leg and said, 'Uh-oh!'" Rebecca says. "He even spoke in a complete sentence when he asked, 'Where my leg at?' In his mind, I’m sure he cared, but we never saw any signs of him feeling defeated or anything. He was fine. We couldn’t believe it. Vince and I asked each other, "Did we hit the lottery with this child?'"

Immediately after Tejas’ last round of chemo on August 23, 2016 (every parent remembers the exact date), Rebecca swapped her son’s mediocre nutrition formula for Kate Farms’ Peptide 1.5, which she and her dietitian had read about on various online forums. "By Halloween, Tejas’ energy levels were noticeably higher, his color started coming back, and he looked like he was getting actual nourishment," Rebecca says. "I was just so floored that food could do that to you." Tejas has stuck with Kate Farms ever since.

By the beginning of 2017, life had become boring, repetitive, and mundane—"and we loved it," Rebecca says. She and Vince spent their days building Tejas back up to strength. Just when they started to "really, really live again, like a normal family," doctors delivered another blow on the one-year-anniversary of Tejas’ amputation.

During a March visit to check up on Tejas’ osteoporosis, Rebecca expected to learn that her son had suffered a fracture because his shin was hurting. Instead, she heard these words: "I’m so sorry. We found tumors in his lungs." In the back of her mind, Rebecca knew this was always a possibility; osteosarcoma metastasizes most often in the lungs. Still, the news was a gut punch. "I cried because I thought it meant that we’d have to start chemo again," Rebecca says. "And we weren’t sure if we even wanted to do that. They literally almost killed him with chemo."

They decided to wait it out. If future scans showed that the tumors stopped spreading, they could eventually elect to remove them in a surgical procedure called a thoracotomy. "A lot of people have beaten osteosarcoma this way," Rebecca says. "In my mind, they’d have to have a really good case to show me why he’d need to be poisoned on purpose."

Results are so far, so good. "Every subsequent scan has shown the exact same thing: The tumors have stopped growing in his lungs," says Rebecca. "We don’t know the plan from here, but he’s healthier now than he was even before his chemo started. I don’t even think he’s been sick since it ended. He sings every day. He dances every day. And we do it with him."

In a way, the uncertainty that the future holds has become the family’s new normal, which provides a certain kind of solace. "Whenever I get upset, I try to remember that I don’t know if tomorrow is going to be good—I really have no idea," Rebecca says. "But today? Today is great."